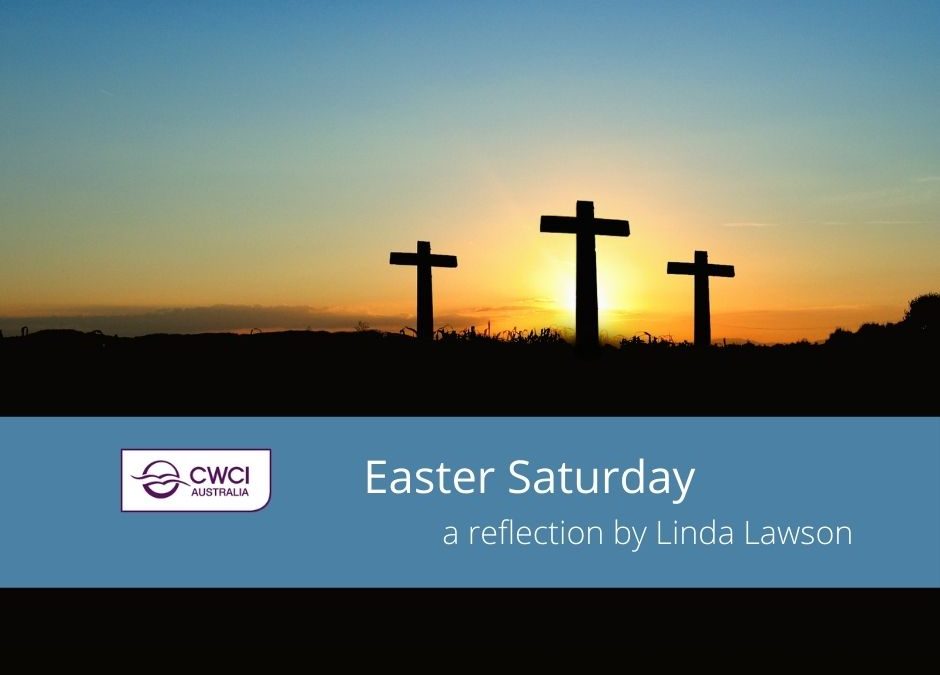 How much thought have you ever given to Easter Saturday?  If you are like me, probably not much.  For most of us it’s probably ‘just’ the day between Good Friday and Easter Sunday.  When I was a child Good Friday was a solemn day – a day we went to Church and remembered that Jesus had been hung on a cross – a dreadful and dark day for him. I recall singing hymns like ‘The Old Rugged Cross,’ ‘Man of Sorrows,’ and ‘O Sacred Head Sore Wounded.’

‘Easter’ Saturday, in our house, was a day of preparation for Sunday – at least for Mum. I didn’t ask “Why?” but our Easter Sunday lunch was as heavily laden with goodies as it had been on Christmas Day.  The only difference was – no Christmas puddings. We children spent the day surreptitiously looking for easter eggs.

But what happened on that first day between Jesus’ death and resurrection – the day we now call ‘Easter Saturday?’  Scripture is strangely silent.  We know the women prepared spices to anoint His body ready for the next day when they were free to return to the garden tomb, but where were the apostles and other disciples? As far as we know only John, the youngest of them all, was at the cross when he died.  Did the others feel the sting of having betrayed him when they left him alone to face those who arrested him? Was fear of both Jewish and Roman authorities mixed with shame? Why was it that only the ‘secret’ followers, Joseph of Arimathea who petitioned Pilate for his body, and Nicodemus, the Pharisee, with a large bag of spices, who carried his broken and battered body to a tomb to be hastily wrapped and enclosed in a cave with a huge stone shutting the world out and Jesus in?

It seems that this Sabbath was, for those who had been closest to him, a day of darkness; a day when everything they had hoped for had come to a crashing end. Their beloved Rabbi, the one they called Master and Lord, was gone and they were left bereft. What were they to do now? We might ask, “Did they not understood the warnings he gave them of what was to come?”  He had tried to tell them, more than once, that resurrection would follow death but it seems their minds had been closed. Now the events that they had just witnessed shut out every glimmer of hope. It seemed indeed a day of darkness and hope-lessness.

The first Easter Day, the Day of Resurrection, does not seem to have been one of unbounded joy. Two, like those on the road to Emmaus did not, at first recognize him; Thomas was not with them when he made his first appearance among them; and John records simply, “They were glad” when they saw him. An event such as this – never before or since, experienced, took time to process.

But what is it like for us – we who live on the other side of the empty tomb? What now is the significance, if any, of Easter Saturday? Unlike those early believers is Easter Saturday a day when we give thought to that special day?  Do we still see value in celebrating that first Easter Day – the day our Lord and Saviour rose from the dead?  Do we consciously plan for Easter Day so that it looks like what it should be – a day full of hope; a special day when Jesus’ Body, the Church, in all its different forms, seeks to share with the world its joy in the remembering of Jesus’ resurrection – and its joy-filled expectation of His return in glory?

Only each of us in our own hearts can answer the question: “Is it?”